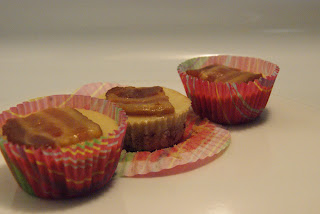 That's exactly what I did with a recipe from this month's edition of Food Network Magazine. They had these great looking mini bacon cheesecakes on page 124 of the May edition.  Now don't get me wrong, they look fabulous with their little pieces of bacon on top but I started thinking...

'A chocolate cookie based crust would just take over the bacon flavour'....then it was..
'Why use vanilla when you can use maple? Everyone knows maple and bacon were just meant to be together!'
'How can I get more bacon into the the crust?'
'Can it really be called a bacon cheese cake if the only bacon is actually just the garnish?'

Seriously folks, I almost hurt myself on this one!  After making some adjustments to the original recipe, I came up with a fantastic little treat with a great bacony bite and a maple taste.  This may seem like a lot of work for 24 mini cheese cakes, but come on now, it's bacon! 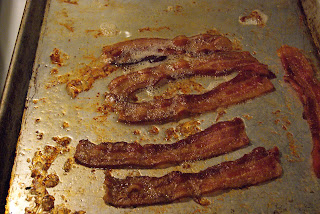 Cut each strip of bacon into 4 or more pieces. As long as you have at least 24 you will be good. 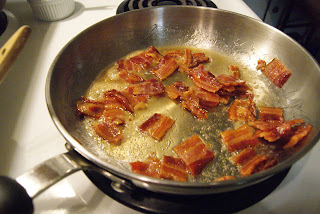 Heat the maple syrup in a pan and add the bacon strips.  Let the syrup get all bubbly and thick (boil it down, reduce....whatever word you want to use). 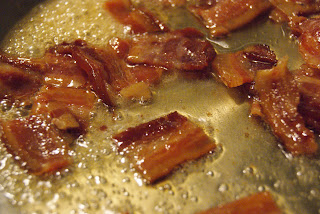 Once the syrup is all thick and the bacon pieces are each well coated in a nice coat, remove the pieces to a sheet of parchment paper to cool. Save 24 pieces so you will have one piece per mini cheese cake.

You will know you've boiled it enough because you will get sugary/maple strings like this: 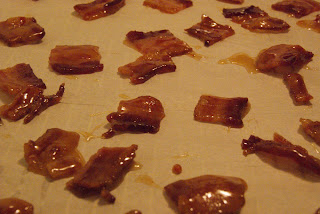 Whir everything in the food processor or blender until mixed and the bacon is broken down into small pieces.

Scoop 1 tsp of the crust mixture into each liner and pack it down tightly with your finger tips. 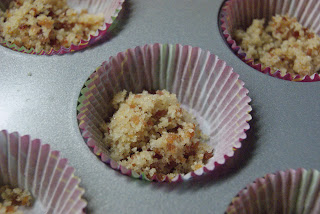 Make sure your cream cheese is at room temperature before starting. It will be easier to blend and make a smoother cheese cake.

Cream together the cream cheese and sugar until smooth. (I like to use the mixer for this but a wooden spoon works the arm muscles).  Scrape down the sides of the bowl as needed.

Add the maple extract and syrup.  Keep mixing until smooth and blended. 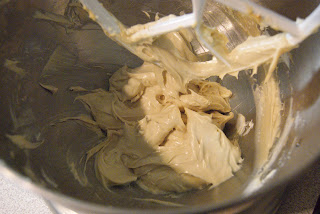 Add the egg and blend just until fully incorporated.

Scoop 2 tsp of filling onto the crusts. 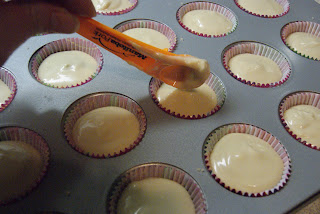 Cool in the pan, then transfer to an airtight container, top with a piece of maple glazed bacon and store in the fridge! 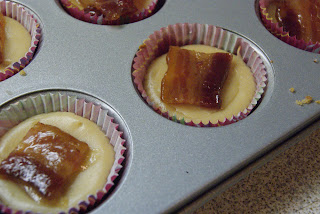 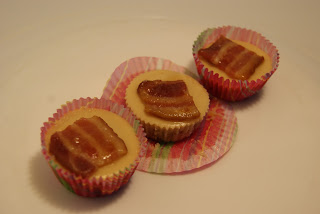 Until next time, stay warm and eat well!
Posted by Unknown at 4:38 PM 9 comments: Links to this post 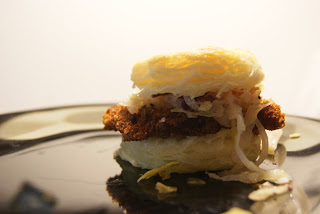 We had a tough morning. We drove out to the beloved Little Cabin in the Woods to collect some items to bring home.  You see, my Dad sold his share of the cabin to his brother in law so we are unable to go out there this summer. This was just plain tough for us as we do love that little piece of paradise so much. (We took the canoe to the neighbours so we can still drive out, visit, and go for a canoe ride!) After the drive home, the Boy worked on some homework, hubby had a nap, and I went to the grocery store. To be quite honest, I know we were all feeling a little down. 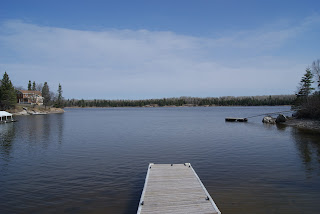 After some thinking and wondering around, I decided on a menu for a dinner that just might cheer us up.  The plan involved the Boy and I working in the Little Kitchen together and since that is always fun, I figured I'd give it a go!

Rewind to last year when we were in St. Louis,MO on a baseball related trip, we watched a lot of Food Network's Next Food Network Star.  We don't get the American FN shows until about a year after they air in the States but we really liked Jeff Mauro and the fact that he won.  Unfortunately, we had to wait until this year to start getting his show, 'Sandwich King'.  We PVR the show and watch it together and love to see what sandwich he is going to make next. (Long time readers may remember that the Boy is quite the Sandwich hound).

Okay, I know I am rambling on now so to make a long story short, I picked up the ingredients to make Schnitzel Biscuits! The recipe on that link has great instructions so I am not going to re write it but trust me...this is tasty! We followed the recipe for the pork to a T! We even brined the pork tenderloin...don't skip that, it is fabulous!

While the pork was resting in the fridge in its brine, I made my favourite buttermilk biscuit recipe to go with the schnitzel. If you have a go to biscuit recipe, use it. I did make some braised cabbage, but I did not follow Jeff's recipe too closely.  I used already shredded cabbage from a cole slaw mix and halved the recipe. (Also left out the caraway seeds).

I now present to you, Schnitzel prep, in photo form!  After the Boy brined and patted dry pork tenderloin,  he cut it into 8 portions that he then pounded thin...I think that was his favourite part! 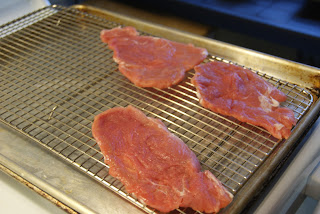 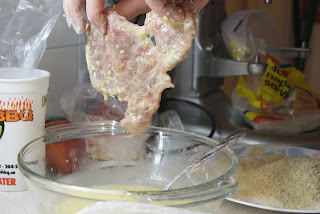 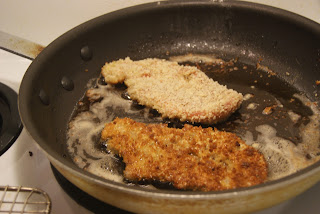 Let me tell you, the sweet acidity of the braised cabbage really does make the schnitzel biscuit a fantastic sandwich. It cuts through the butteryness of the biscuit and the pork and just makes this sammy oh so delicious! 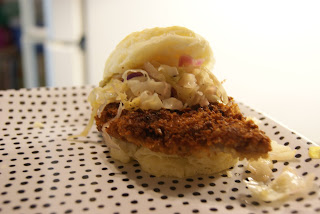 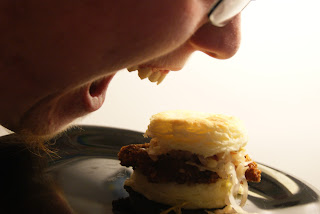 I couldn't even take the pictures with the Boy trying to gobble up these sammies! I don't blame him one little bit...they were just that fabulous!

Cooking with the Boy this evening really helped cheer us up. Some time together in the kitchen was just what we needed!

Until next time, stay warm and eat well!

Posted by Unknown at 9:50 PM 3 comments: Links to this post

Back to Normal (Whatever That Is) 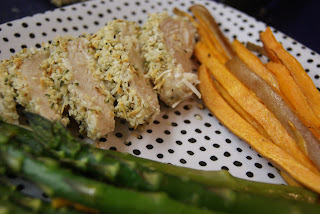 Things just might start returning to normal in the Little Kitchen! First of all, the Boy returned from a fabulous experience in Kenya! It is nice to have him home.

I just spent 2 full weeks at the theatre stage managing the school's production of 'Footloose'. (Gotta cut loose....)  130 middle school students working on and offstage to get the show going and I wish I could say it was smooth sailing the entire time.  Some strange stomach bug hit the cast a crew over the past week....yep, you heard me right.  By closing night, I had buckets at every stage exit, extra garbage pails backstage, and spots for the sickies to sit backstage....I really wish I was kidding about this but if I hear one more "Mrs Morton, I feel like I'm going to...."   All in all, most of the kids were real troopers.  Our leads would unleash their fury into the pail, then make it out for their entrance...seriously. The kids did a great job of not letting the audience knowing what was going on backstage.

I have now had the weekend to recuperate, rest, and get back into the kitchen. I even baked Irish car bomb cupcakes and strawberry pistachio cheesecake for a friend's birthday! I have been wanting to break open the bag of Manitoba Harvest's Hemp hearts for sometime now and today I was itching to try something new.
Hemp Hearts are perfect for sprinkling on anything from yogurt, to salads, to baked goods and add some fantastic nutrients to your food. They add a pleasant nutty taste to the food you add it to.

Tonight I decided to use the hemp hearts on chicken breasts.


I mixed about 3/4 cup hemp hearts with about 3 tbsp of myzithura cheese.(a Greek sheep's milk cheese). 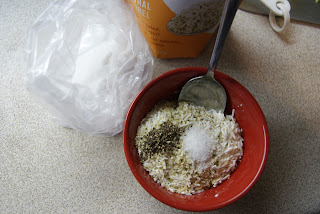 After sprinkling the chicken breasts with salt and pepper, I spooned on the hemp hearts/cheese mixture and patted it down.
Bake in a 350 degree oven for about 25 minutes.  That's it.  That's all.  Friggen' tasty! 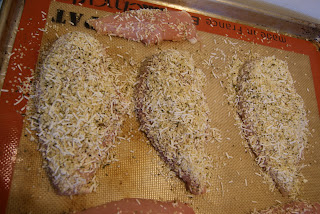 Until next time, eat well and stay warm

Posted by Unknown at 9:12 PM 3 comments: Links to this post