My Weeknight Out at the Lobby on York

Every now and then it is nice to be spoiled rotten, isn't it? Ahhh.....yes.....spoiled rotten. You see, a few weeks ago I received an offer that was just too darned good to pass up. So of course, I said yes! I don't know too many people who would pass up a night out with a group of fun loving people for dinner at the Lobby on York. I simply cannot think of a better way to spend a Tuesday evening! So here I sit, watching some baseball and reminiscing about the fun, food, and wine at the Lobby on York.

I must admit to not going to the downtown area all too often these days but once upon a time when I first started dating Hubby, he lived in the building across York street from where The Lobby on York is located and to be quite honest, the location was a little on the seedy side. Opened in May of 2009, The Lobby has such a nice warm glow that it gives off the perfect vibe for a nice slow meal with friends and loved ones.  It has definitely been fixed up, looks completely different, and serves up some modern grub in a gentle, warmly lit environment.

It was a quiet evening in this cozy restaurant and lounge, well it was quiet until us ladies showed up! We were greeted warmly at the front desk by general manager, Shan, and escorted to the back where they had a room set up for us. Almost as though they knew we might cause some sort of trouble. Shan gave us the low down on the Lobby, including the two different rooms they have for various sizes of gatherings.
Everything was already set up for us, including a table with the different wines we would be enjoying that night. Dinning room manager, Karl, got the wine flowing right away for us, with a nice light Riesling from Loosen Brothers. I am going to leave the wine comments up to Sarah as she actually knows what she is talking about in that department, all I know is that it went down smoothly. Once all the ladies (Trina, Shel, Rebecca, Susie, Sarah, and myself) showed up and we got settled, Karl hopped to it! Before we knew it we had 7 appetizers and 3 different wines in front of us.

We were treated to the following scintillating appetizers: Albacore tuna tartare served with avocado, sesame, chili aioli, cilantro, and these delectable little homemade ripple chips. I have never tried a tuna tartare before and this was fabulous! I would order this again.

Sliced beef & crostini: smoked tenderloin served on a Guinness mustard with horseradish cream, Parmesan, and fresh arugula. An overly strong smoky flavour on the beef but it goes so well with the horseradish cream that is cut the smokiness.

Village Bay oysters served with lemon and a red wine mignonette. (These gems are from Canadian waters.) These oysters were salty and fresh. The mignonette paired so well they went down smoothly. I could have have a few more of these guys.

Korean beef short ribs done in a ponzu marinade with sesame, cilantro, and a house made red chili sauce similar to Sriarcha, but better. Another one of my favourites.

Duck quesadilla made with pulled duck, a Brie and cheddar mix with sesame, bell peppers served with spicy mayo. Served as a roll cut into sections, a complete taste sensation.

Three wines where chosen to be served with our appetizers. To be honest, I just smiled and nodded when Karl explained the wine related details. My only question was 'Karl, is there alcohol in that wine? Then pour please.' It all tasted fabulous and that is really what matters to me.

While the 6 ladies chatted, laughed, and made a lot of noise, our selection of entrees was being carefully prepared by head chef Jesse.

For our entrees we were treated to a fabulous selection of food: 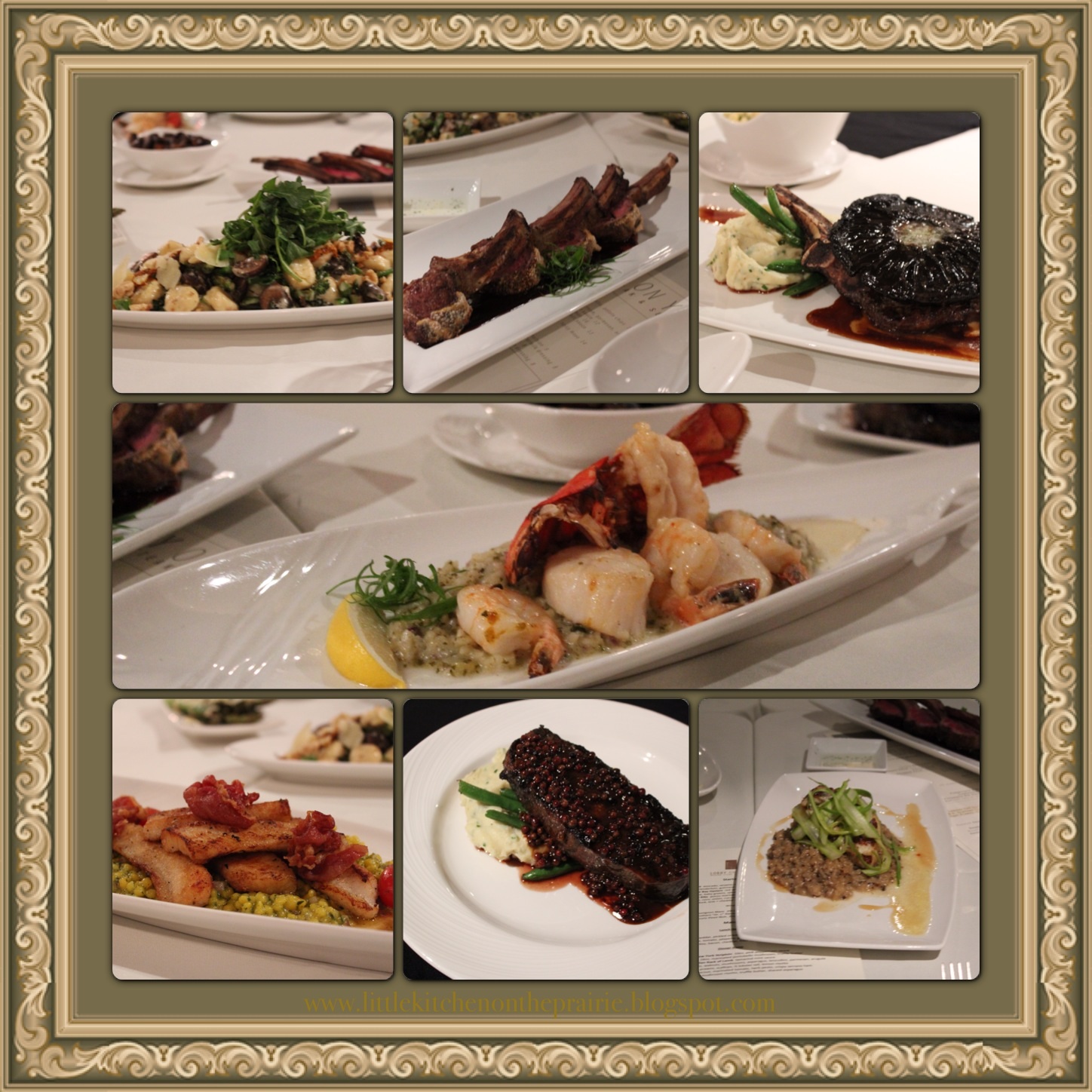 Peppercorn New York strip loin served with a pink peppercorn sauce, scallion mashed potato and seasonal vegetable. (Beef at the Lobby comes from High River Alberta, not local, but still Canadian.) The steak was well cooked but I am not a huge fan of too many peppercorns. If you love pepper, then this is for you.

Portobello rib steak served with a marinated portobello mushroom and truffle butter on scallion mashed potato and seasonal vegetable. My favourite entree of the night.

Australian rack of lamb with a tamarind mint sauce. I know lamb is best served rare but this was a bit too rare for my liking. Taste wise however, it was quite good.

Seafood trio which turns out to be prawns, scallops, and a 1/2 lobster tail served on lemon risotto. I don't eat a lot of seafood but this not only was pretty to look at, it was pretty to eat as well.

Local pickerel served on saffron couscous, marinated tomato, and herb pesto topped with crispy Serrano ham. I am a fan of pickerel and this fish swam well with all the rest of this dish.

Alaskan lingcod served on wild mushroom risotto, truffle butter, and shaved asparagus. This was a new fish to me. It was a meaty filet but the most memorable part of this dish was the risotto. A nice combination.

Three different wines were carefully selected to go with our entrees and yet again, the wines went well with the food.

Karl was a good man and even brought out a few desserts to try: 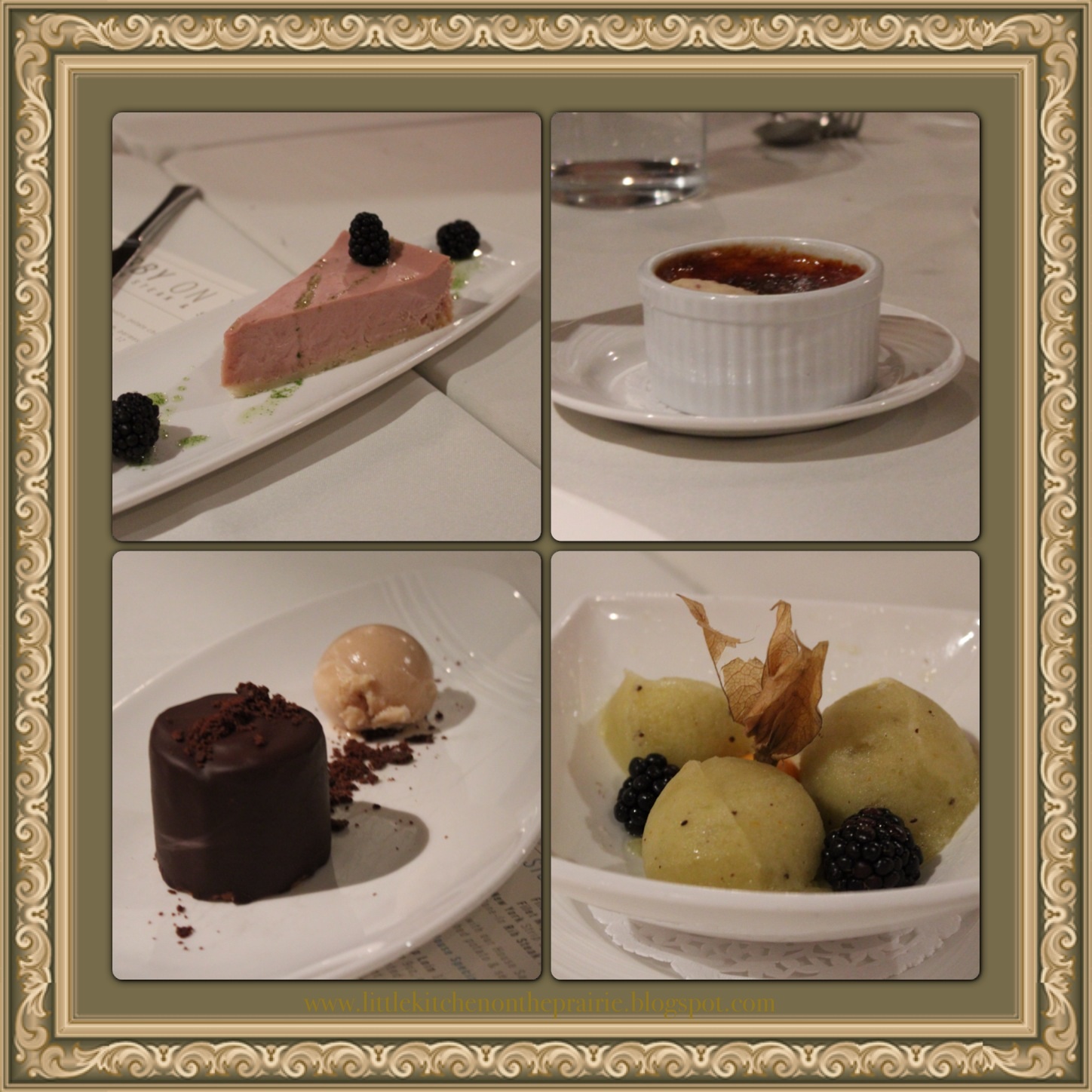 I am fairly new to the restaurant review game but if you are looking for a night out with great food but don't want the same old boring food, this is the place to go. Be prepared to spend a little extra money but it will be worth your while and your taste buds will thank you.


The quick and easy:

Lobby not only has their dinner menu, they also offer up a fabulous lounge menu and a lunch menu!

Lounge offerings run from about 8$ for sides to 16$ for appetizers or a burger, and the steaks start at 24$

The lounge at the Lobby has some fabulous deals during the week which include:
- Thursday's buck a shuck oysters and 8$ drinks.  Now don't go ordering a ton of oysters for 1$ each and drink water. Have a drink or two. The bartenders will fix you something nice.
-Friday in the lounge you can get a 5 oz glass of wine for 5$ or a 9 oz glass for 9$ (or how about the bottle for 25$)
-Jets nights will find the lounge offering shots for 3.50 and appetizer 2 for 20$ (not signature appies though)

The lunch menu runs from about 6$ for the soup up to  about 16$ and cover a wide range of salad, sandwiches, and seafood offerings.

Dinner offerings are more expensive but have plenty to offer. Starters are in the 10 to 15$ range. Entree offerings will run from 24$ to 39$ with side dishes starting at 8$.

A funny thing happens when you dine out with food bloggers; Everyone HAS to take photos of all the food before we eat. Not only that, everyone feels the need to live tweet the event as well thus sending my phone into a tizzy of notifications. At least when dining with fellow bloggers, no one complains about everyone having their phones out. We all understand each other.

Thank you so much Lobby for putting up with us!!! 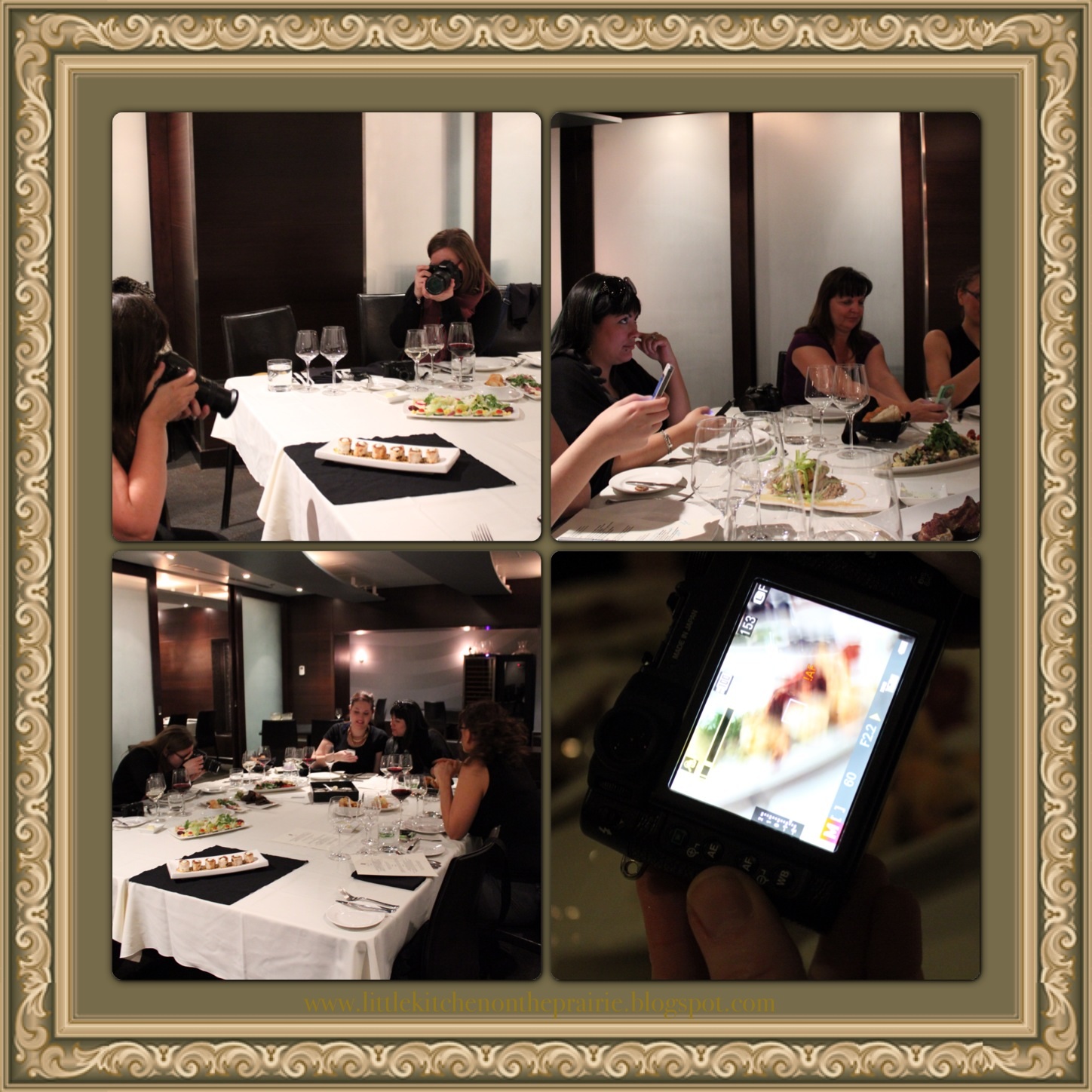 Until next time, stay warm and eat well.

Please note that while the Lobby generously provided us with all the food and drinks during our night out, it had no bearing on my opinions regarding quality and taste.